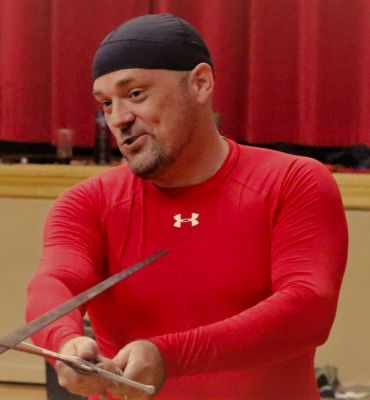 Ted got his start in swordsmanship in 1997 as a part of a group associated with the Renaissance Faires in northern California. He quickly discovered that the material being taught was not associated with any documentable sources and began looking for people that could teach him "real" swordsmanship. This put him in contact with other groups that were working on what would these days been known as HEMA but was then known as WMA. Don Smith, known to his friends as Hans Yosef, introduced him to period sources by sharing a book he compiled, and a copy of which Ted still has, of all of the then available Fechtbuch.

This was Ted's first introduction to Joachim Meyer's Kunst des Fechtens and would begin a life long journey to understand and share this art with others. In 2004 he was able to get a copy of the first published complete translation of Meyer's work. Like many he spent countless hours pouring over the material working to understand its techniques and philosophy. This became primarily a personal journey for a number of years when Ted moved to Melbourne Australia.

In January 2020 Ted worked with members of the club to found a new organization focused on bringing together all of the historical fencers in Sacramento. The idea was good, the timing less so. In 2021, after a period of seeing classes moved back to the parks were they had their roots, the Sacramento Historical Fencing Academy was finally able to become a reality, bringing together instructors teaching German Kunst des Fechtens, Spanish La Verdadera Destreza, Italian Scienza d'Arme, British Broadsword, and even LEDsaber.

Making use of his Master's in Educational Leadership Ted is responsible for the running of the school and the designing of the Kunst des Fechtens curriculum. He teaches the Introduction to HEMA and KdF classes, the White Ribbon classes, and a class on Meyer's Art of the Longsword.

Ted may be booked for private lessons on Wednesdays from 4pm to 5pm. Additional times are available by appointment. He charges $40 for a 30 minute private session, or $60 for an hour long session, a second person may take the same lesson for half price. Ted's private lessons focus on a better understanding of the rich complexity of Meyer's arts and are available to beginners and experienced fencers.